South Africa Adventure â€“ Day 8
Todayâ€™s theme was the Big Five and our morning game drive started off with the king of the 5 walking right out in front of our truck. It was a male about 3 years old according to our ranger, Janco. He walked right up to our truck and right past us like he could care less that we were there. It was so amazing. After watching him for a bit we were off to see what else we could find and we even luckier to find a couple lionesses and their cubs hiding out. There were not easy to see since they are very good at hiding but our ranger did a super job of getting us pretty close.
After the lions we ran into a pretty big herd of elephants. There were elephants of all sizes even a very small baby that our ranger said looked to be about a week old. It pretty much stayed under its mom so it was hard to get a good look. While we were watching one elephant eat some leaves he decided that the leaves were too high so he started to knock the tree down and it was coming right at our truck. Good thing our ranger has quick reflexes and started the truck up and backed us out pretty quick.
By this point I think we were all just in awe and it was not even 7 am yet! We had now seen 3 of the big 5 â€“ Lion, Elephant, and Buffalo. We are still hoping to catch site of a rhino and leopard. Some of the other trucks said they saw rhino but so far no one has seen a leopard.
After the morning game drive we returned to the lodge for breakfast â€“ it was hard to believe it was only breakfast time. After breakfast we had a wonderful demonstration by Trompie. He showed us archery and blow darts. I was picked to be his example and he said no matter what he could teach anyone to shot an arrow with less than 5 attempts. He was an excellent teacher because I was able to hit the yellow bullseye on my second try! Archery is something I always wanted to try so it was so cool to be able to get to do that! There was also a beading demonstration by Motsatsi and we could all make a beaded necklace or bracelet. I never knew how big beading was in Africa.
We had lunch and some time to relax before our evening game drive. We were lucky again tonight and found 2 sleepy cheetahs! This was perfect since the junior adventures were watching Disneyâ€™s African Cats after dinner. The evening game drives are a lot of fun even if we donâ€™t see anthing. Before it got dark our ranger drove us over to the river area and showed us all the damage done by the recent flooding. It was scary to see how much damage rain could do.
Today word of the day is Boma â€“ which most Disney World people have heard before but did you know that it comes from Swahili and means an enclosure normally used for livestock. Kind of funny that we know it as a place to eat and that doesnâ€™t only apply to Disneyâ€™s Animal Kingdom Lodge because here at the Kampana River Lodge we dined in the Rhino Boma tonight. It was another wonderful meal complete with bon fire. After dinner I snuck down into the snake pit with the junior adventures to watch the movie. It was a great way to end another great day! 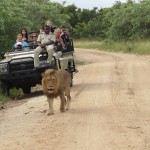 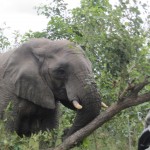 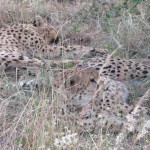 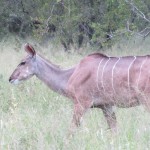 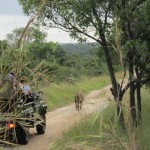 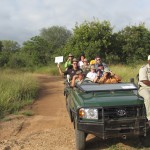 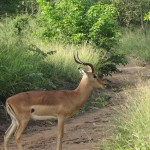 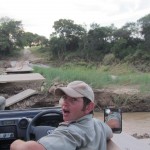 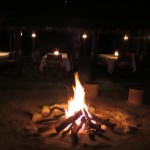 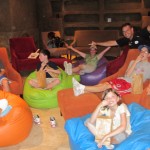