Day 9 â€“ Little 5 / cialis cheap Day 10 Sala Kahle
Internet in the wild doesnâ€™t always work so this a double day post.
Day 9 started with tea and our morning game drive. It was a little chilly this morning so we didnâ€™t see as many animals as the day before. Our ranger and tracker tried really hard to find us a rhino but no luck. It was still an amazing drive but I could have done without the spiders. As we drove down some paths it was clear we were the first truck to go down certain ones since we were riding through the large webs that went from one side of the path to the other. It was a bit scary but our ranger and tracker took good care of us. We headed back for breakfast and then it was time for the one thing on the adventure I really wasnâ€™t looking forward to â€“ the reptile and bug demonstration. I have to admit I am glad I went. The speaker was very passionate about snakes. He made me realize that snakes are not as scary as I used to think. Snakes really donâ€™t want to bite people its people that cause the snakes to bite.
After that it was about time for lunch and then I was headed to the spa. I had a wonderful hot stone massage which was a nice to have at just about the end of the trip. The wellness center at Kampana is beautiful with its own private pool just for adults.
I went from my spa appointment to afternoon tea and then back out for another game drive. We were still searching for that rhino with no luck. We did see a lot of other animals though including some that we hadnâ€™t seen yet like the wildebeest. Sadly after the game drive it was time for our farewell dinner. It was an amazing dinner with some great music and dance. The night ended with a powerpoint show of some of the photos taken during the adventure. Since the trip isnâ€™t exactly over yet it wasnâ€™t too sad. We still have one more game drive in the morning followed by breakfast and sort of mini game drive back to the airport. We are all flying to Johannesburg so we will officially say goodbye to everyone then.
Day 10 â€“ our last morningâ€™s game drive was a success â€“ we finally found a rhino! Not just 1 but 2, just hanging out as we drove past and put on the brakes to back up and get a good look. It was bittersweet since we also knew this was the last time we would be driving the trails of Kapama. The game drives were the Africa I had pictured when I thought of going to Africa and they even surpassed my expectations. It was just so amazing to be driving around and be a part of the animalâ€™s world. It was sad to hear how people poach the rhinos and some even found a way onto the preserve and killed one. They only want the horn so these poor animals die for no good reason. I hope that they can put a stop to the poaching so we donâ€™t lose these magnificent animals for good.
After our game drive it was time to have breakfast and pack up. We headed back to the airport which is sort of a mini game drive. We had a giraffe say good bye to us as we left which was very cool. Due to flight issues we needed to add an extra day in Johannesburg. This is not normally part of the Adventure but Disney found us a great hotel to spend the night at and tomorrow we will do a short city tour. I donâ€™t think I will have internet again until I get back to Florida. I hope you have enjoyed reading about my adventure and I will post a wrap up when I am back in Florida. I can say for sure that I wonâ€™t be able to travel any other way than Adventures by Disney from now on! I just wish I could take our guides Chris and Craig with me on each Adventure. They are the best guides and make a great team!
Sala Kahle (pronounced say-lah kaw-lee) which means good bye or go well. 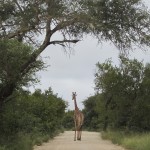 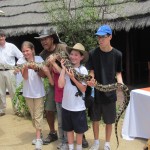 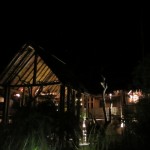 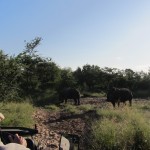 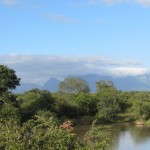 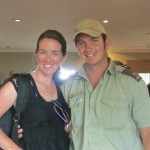 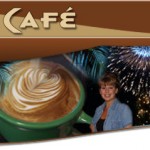