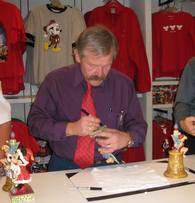 Well another Mousefest has gone by in a blur!  It always goes by so fast with so much packed into those crazy days!   Here is a quick recap of a few of the highlights for me.  While some of you were getting ready to board the Wonder for the Mousefest cruise I was in Downtown Disney waiting to meet Jim Shore.  In case you don’t know who he is he is an artist that does some adorable folk art.   I just love the Tinkerbells that he does so that is my new collection.   He too was headed to the Wonder.   I was starting to feel like I was the only one not cruising this year. I kept myself busy while most of you were enjoying the cruise.  Finally came time for Mousefest 101 at the Comtemporary!    The weather didn’t want to cooperate but the event seemed to be very well attended anyway.   Luckily the weather cleared, and even though a little cooler than I prefer, Friday was a beautiful day.   I had been looking forward to the WDW Today 500th episode for a long time and then was mad at myself becasue I forgot my camera.   Luckily Michelle had hers and was nice enough to send me a photo to inlcude, even though I think Annette would prefer she hadn’t.  It was very cool to be a live studio audience for the show and even add in the "ding" sound effect.  Plus we had one of the best cakes I ever had in Disney!   Good choice Annette!

Friday night was our first dessert party for Illuminations.  It was great to meet our clients face to face.   There was an amzing full moon and clear sky that night.   Agian wish I had my camera but oh well.   On to Saturday and the Mega Meet.   This year it was held in the Yacht Club convention center which was super!   Everything seemed to go smoothly and before I knew it the mega meet was over and it was time to get ready for another dessert party!   Sunday morning I got up and headed to the Studios for the AP tour of American Idol.   Ok I have to admit I have never wathed that show and it really threw me off when Disney announced they were adding it to the park since it isn’t on a Disney owned channel.   From the outside it does seem to fit very well in the park though. Supposedly AP holders are the first to get to tour this new attraction, they said even media havent seen it yet.   Therefore no photos inside, which made me feel better since I forgot my camera anyway.   The tour was cool and took us through the area where guests will go to audition – I will never see that area again since I can’t sing to save my life.  Supposedly it all looks just like it does on the show but I will have to take thier word on that.   Then we went into the theater where the grand finale will be.   There are 3 hidden mickeys in the stage but I only found one in the short time we were in there.  So each day there will be about 7 guest chosen to sing in the grand finale and the audience will get to vote for the winner.  The winner then gets a sort of fastpass to take to the actual show auditions.   They wont automatically get on the show but they do get to the front of the audition line.   While Disney is letting anyone age 14 and up do the show in the park the real Amercian Idol has specific age range so if a winner doesnt fit that they can give thier ticket to someone else.  Even though I am not a fan of the TV show I am looking forward to seeing at least one of the shows in the park.

It was great meeting old friends and making new ones at another wonderful Mousefest.   I hope you are all recovering and now getting ready for the crazy holidays.   Can’t wait to see you all and do it all again next year!