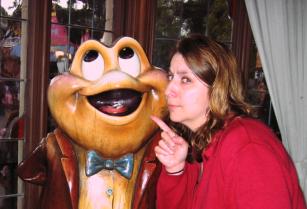 Melding with the Atmosphere

I’m about to let you see the photos that I promised myself that I wouldn’t post on the blog for all to see.  Why?  Because they’re silly and goofy.  They show me being a kid.  I guess this is really no secret.  I’m a self-proclaimed big kid!  And here’s the proof:

I have an odd obsession with Mr. Toad, even more so since he left Walt Disney World.  I told you on an earlier blog that I would hunt him down.  And I found him.  I really wanted to take him home.  Instead I settled for this photo opportunity. I admittedly sort of stopped the Mr. Toad’s Wild Ride line to do it.  But it was momentary and my fellow Disneylanders didn’t seem to mind.

My thought process here was sort of like "don’t you send me to hell again".

Once on the Magic, there were plenty of ways to be silly and many goofy photo opportunities: One of my traveling companions, Terry, was so sweet and bought us shirts before the trip.  What Terry didn’t realize is that we fit the theme perfectly at Animator’s Palate.

We decided to coordinate the evening we dined there.  If you’ve never been on the Magic or seen the Travel Channel special, Animator’s Palate restaurant is a treat!  It is the dining room in your rotation that literally puts on a show.  The room and your waitstaff start out in black and white (a la the pencil drawing) and then "animate" to full color.  It is a sight to see and just one of the reasons that the Magic deserves its name!

And when it came time for the Pirates In the Carribean Party night, we all got into the spirit.  Janet and Terry couldn’t help but channel Jack Sparrow and Barbossa with a fight with the swords from their themed drinks. My point is, yes, we’re all very silly and had a great time together.  We were NOT hesitant to be that way!  I say let the theming and the magic wash over you and sweep you up off your feet.  Get involved in the activities!  Become part of the atmosphere!  Don’t just watch your kids doing it…you should do it too!  I think that’s the best way to enjoy a Disney vacation.  Declare at least for that week, that you’re never growing up.

You may stand out but you’ll definitely meld into the atmosphere.  It makes for great stories and photos.  Plus it’s a whole lot of FUN!