Home Destinations Galaxy’s Edge Must Do’s and Must Knows 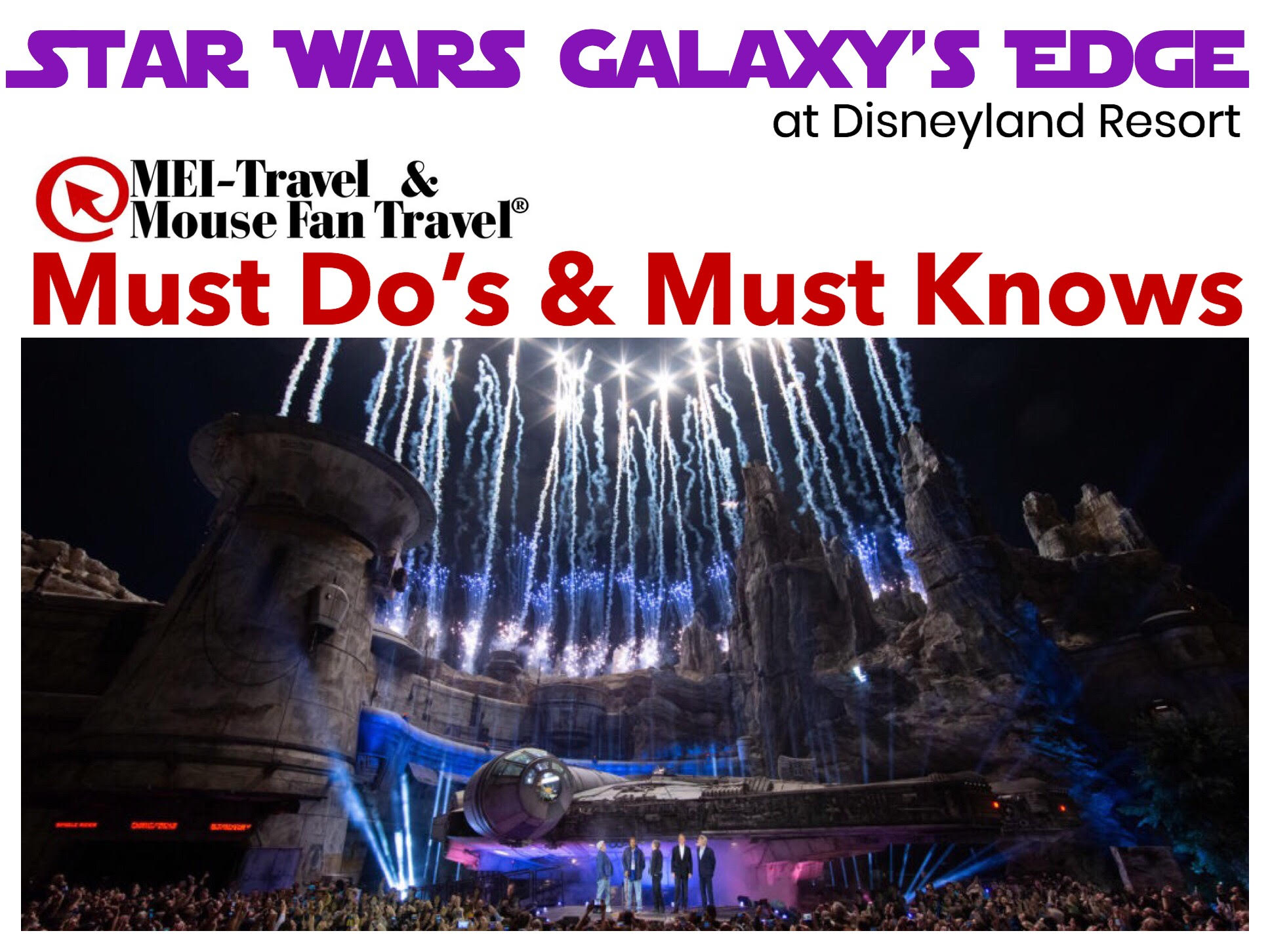 Galaxy’s Edge Must Do’s and Must Knows Star Wars: Galaxy’s Edge is now officially open in Disneyland over in California, and while only one of the two signature attractions are open at this time, there is no shortage of details and fun to explore. With Galaxy’s Edge being the largest single themed expansion in any Disney Park, it is also perhaps the most interactive, with the most details, and the most unique experiences, since this is, after all, a whole new planet to most of us.

We thought all of these new places and encounters deserved a bit of a primer for those of us who may not be as familiar with the “Ways of the Force.” This 14-acre space is huge, so if you’d like to familiarize yourself with the space, the newly released park map with food and merchandise locations will be a great help. Now let’s dive in to the info!

What to Know Before You Go: As I’m sure you know by now, the land known as “Galaxy’s Edge” is actually located on the outer rim planet of Batuu, specifically at “Black Spire Outpost.” Once a bustling trading post, Black Spire Outpost is now a rundown settlement. With the advent of hyperspace, the land dissolved into a port for smugglers, rogue traders, and adventurers (that’s you!). Named for the once towering trees which are now petrified into black spires, this is a place to go if you don’t want to be found.

Despite that reputation, there is one section of Black Spire Outpost that is First Order Territory, so rebels of the Resistance be warned. Each faction has their own establishments in the land, so First Order allies can purchase merchandise to support their cause, just as Resistance fighters can as well.

The time frame for now (storylines could always change in the future) is between episodes 8 and 9 of the current Star Wars film series. Despite that, you’ll find no mention or understanding among “cast members” present in the land or Star Wars as a separate entity to their own reality. Even the merchandise and food will not reveal anything but local ties and you will not find any merchandise from neighboring Disneyland within Batuu. It is truly an immersive experience like no other. Which brings us to our next thing to know: what to say!

For all the reasons noted above, there are some words and phrases exclusive to Batuu and Black Spire Outpost that you may want to familiarize yourself with before your visit, so you don’t draw attention to yourself like C-3PO walking into Mos Eisley Cantina. Here’s a rundown of the most common and useful phrases in Black Spire Outpost: Docking Bay 7 Food and Cargo is a designated location for traveling food shuttles.

There are many unique items to be found within Black Spire Outpost, including the famous “blue milk” as well as green milk, and many other options.

We’ll have more updates on the food of Batuu in the future, but for now here’s a quick peek at some of the offerings: 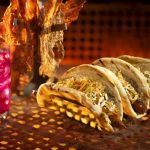 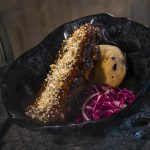 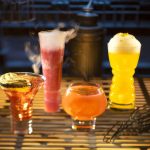 From left to right, alcoholic beverages: The Outer Rim, Bespin Fizz, Yub Nub, and Fuzzy Tauntaun can be found at Oga’s Cantina. 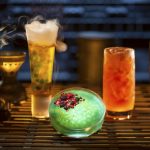 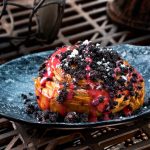 Mustafarian Lava Roll – a sweet galactic delight that can be found at Docking Bay 7 Food and Cargo and Oga’s Cantina.

As mentioned above, the merchandise within Batuu at Black Spire Outpost will not be “Star Wars” branded, these items will be “hand-crafted” by artisans within the land, and sold to visiting travellers (that’s you again!). Here are some highlights of the exclusive merchandise:

There are also merchandise locations offering clothing for both First Order and Resistance members. 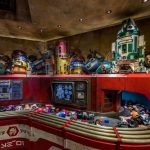 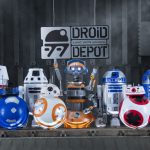 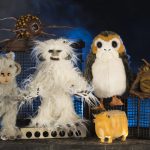 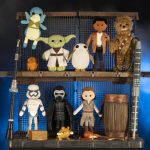 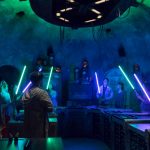 As of now, Millennium Falcon: Smuggler’s Run is the only attraction opened in Disneyland’s Galaxy’s Edge, with Rise of the Resistance needing a little more time to welcome visitors. This is the attraction Star Wars fans have dreamed of; where you get to pilot the Millennium Falcon – the fastest hunk of junk in the galaxy.

Hondo Ohnaka is running a “legitimate business” out of the spaceport, called Ohnaka Transport Solutions. When guests meet Hondo in Millennium Falcon: Smugglers Run, he tells them he has more cargo than he can handle and needs extra flight crews to make some runs for him – especially crews that won’t ask too many questions about the cargo or how Hondo acquired it! – LaughingPlace.com

This is a motion simulator ride where you have one of 3 options when you get onboard:

Once you are done with your mission, Hondo will tell you how you did and if you hit some things along the way, the exit hallway will show the damage your crew caused.

The height requirement for Millennium Falcon: Smuggler’s Run is 38in (97cm) or taller to ride. It has some small drops, it is dark and loud so plan accordingly with your smaller smugglers.

Also be aware that part of being a pilot is possibly crashing into some things, which may make the rest of your crew slightly annoyed at you, so if you can’t take some good-natured rubbing, or don’t want to be known as “that guy that crashed the Falcon…” maybe opt for a different position on deck.

Since we don’t want to spoil all the details and interactive elements, we wanted to point those who do want all the info before they go to some of our Disney friends and advertising partners. For details, photos, videos and reactions to Galaxy’s Edge, the food, the merchandise, and Smuggler’s Run – head to any of our partners below to view their amazing coverage of Batuu’s grand opening in Disneyland:

As well as our own Beci Mahnken, MEI & Mouse Fan Travel owner, CEO and President, who was also on hand at all the grand opening hoopla!

After that, well, all bets are off as far as being able to get into Batuu. Disneyland has not announced as of now how they will handle crowds or if that area will be closed due to capacity after the reservations window has ended. We will of course keep you posted as we get official updates.

Our recommendation is to plan a little further out, perhaps the time between Thanksgiving and before the Christmas holidays and school vacations start, or even planning a vacation for next year, to ensure most of the first wave of visitors to the new land has died down a little. Again, we can help you plan for that, and our Mouse Fan Travel agents, armed with the knowledge or annual passholder blockout dates being lifted, schools being out, and other events which would affect crowd levels, will check the latest availability and make sure your visit to Batuu is a smooth one.

We hope this planning guide has helped take some of the mystery and confusion out of visiting Galaxy’s Edge and given you even more excitement to look forward to! If you have any questions, be sure to comment below or visit us on our social media channels, where we’re happy always happy to help.

Until then, may the spires keep you!