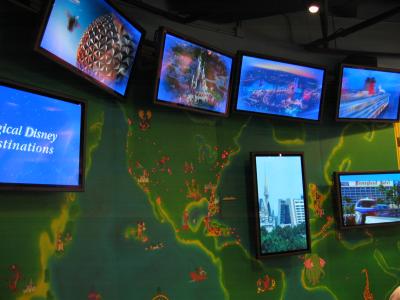 Right in my own backyard, Disney previewed a DVC Animal Kingdom Lodge Villa just for me and several hundred of my closest friends at the Grand Opening of Disney’s Doorway to Dreams at Woodfield Mall near Chicago, IL.

The magic spread throughout the mall as character meet and greets were taking place where the big Christmas tree stands during the holiday season.  And there were Mickey ears everywhere!  Ah, it put a smile on my face that will stay with me until my next trip. Before we toured the villa we became entranced by the flat panel screens that elegantly faded between Walt Disney World, Disney Cruise Line, Disneyland and Adventures by Disney scenes.

Then it was time to view the replica of an Animal Kingdom Lodge Villa.  If it had been a scene from a sitcom, I would have needed some dream sequence music, as I felt instantly transported to Lake Buena Vista. We entered into the full kitchen/living room area where the rustic table with "Lion King" chair backs set the tone.  The kitchen was modern with beautiful dark countertops, full sized fridge and dishwasher. The couch faced a beautiful flat screen table in an artsy African-inspired cabinet. The master bedroom has a colorful spread with a beautiful dark wood headboard.  The carpeting is animal print with, of course, hidden Mickeys! The master bath has a HUGE walk-in shower and deep whirlpool tub. And I was immediately drawn to "The Lion King" shower tile detail! And as we emerged from the master bath, I saw the flat screen TV with this amazing cabinet. The other bedroom had another colorful spread, couch and flat screen TV.  It also had a little area with a sink, small fridge and microwave.  There was another bathroom with an African print shower curtain with some not-so-hidden Mickeys. And almost as if on cue, as I left, there were fireworks!  Okay, so they were on the flat screens.  I guess that’s as close as I can get to magic until I’m able to try out the Animal Kingdom Lodge Villas.