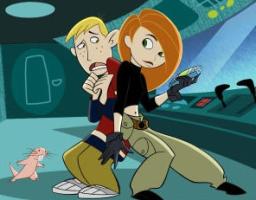 If, like me, you’re a fan of Disney’s Kim Possible and her sidekick
Ron Stoppable, you were disheartened to hear that after three seasons
the show was likely to go away. The folks over at SaveDisneyShows.org
even put together a Save Kim site, and I’m happy to report that today
it was announced that they have succeeded. Kim Possible has been
brought back for a 4th season full of Kim, Ron, Rufus, Wade, Dr.
Drakken, Shego, SenÃƒÂµr Senior Sr., and SenÃƒÂµr Senior Jr.

Kim Possible, which has enjoyed
success with young viewers around the world, is from multiple Emmy nominated
creators/executive producers Bob Schooley and Mark
McCorkle.

If you’ve never watched Kim Possible, shame on you.