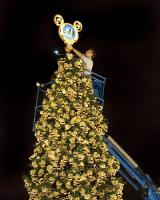 It’s Christmas time at Disneyland. It almost hurts to say that. What ever happened to waiting for turkey day? I’d like to take this moment to reach deep inside and pull out my crotchety old man voice to say It seems to get earlier every year. And this year it comes in a
50th aniversary gold edition. From a Disneyland press release:

The 2005 holiday season at the Disneyland Resort will be a whole lot
brighter this year as the traditional Christmas tree in Town Square on
Main Street, U.S.A. goes gold in honor of DisneylandÃ¢â‚¬â„¢s 50th Anniversary
celebration (continuing daily through 2006). Glittering in gilded
splendor the traditional live tree has received the Ã¢â‚¬Å“Midas TouchÃ¢â‚¬Â with
a golden theme to commemorate DisneylandÃ¢â‚¬â„¢s half-century milestone.

Here are the trunk-to-tip facts regarding this most unique Disneyland holiday icon: