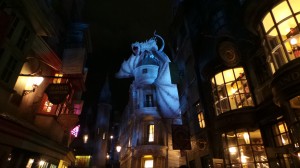 Diagon Alley at Universal Studios is the latest addition to the Wizarding World of Harry Potter. Guests have two ways to enter Diagon Alley – through the London streetscape in Universal Studios or on the Hogwarts Express from Hogsmeade. (Note – Guests must have the Park to Park Option on their park admission in order to ride the Hogwarts Express as the ride starts in one park and ends in the other.)

No matter how you enter Diagon Alley, prepare to be blown away. Universal has set a new benchmark for attention to details! Guests who have read the Harry Potter Series or seen the movies will find themselves immediately immersed in the world they know so well. Every building, every shop window, is eerily perfect in its replication.

Harry Potter and the Escape from Gringotts is the cannot miss attraction in Diagon Alley. As you enter Gringotts and pass by the Goblin bankers, you move farther into the earth to board your ride vehicle. Part simulator, part roller coaster, I found this attraction to be less intense than the Forbidden Journey attraction over in Hogsmeade but still heart-pounding!

AFTER riding Escape from Gringotts, head over to the Leaky Cauldron for lunch and enjoy traditional UK fare – bangers and mash, fish and chips, cottage pie, and more. And don't forget to stop at Florean Fortescue's Ice Cream Parlour for some Butterbeer Ice Cream! Keep an eye on the dragon atop Gringotts – he roars and breathes fire! The lobby of Gringotts