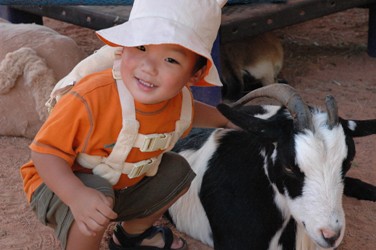 I have never been more scared in my entire life than the moment last week at Disney Hollywood Studios when my husband joined us after passing through security. I looked at him and asked, "Where's Ryan?!" "He's with your Mother!" No, he wasn't. After what felt like three frantic hours but was in reality no more than two frantic minutes, we were reunited when Ryan found us. Luckily, we had prepared Ryan for this situation and he knew just what to do. I, on the other hand, had ignored all the advice I have given clients over the years and was woefully unprepared for this, so I panicked. It was not pretty, people.

What did we do wrong? Learn from us and don't make the same mistakes!

– We had not taken a photo of Ryan that morning. Had he been gone long enough for a Cast Member to ask what he was wearing, in my state, I don't know if I would have remembered. Having a daily photo of your child on a cell phone means not having to remember!

– We did not communicate clearly. My husband yelled after my Mom to tell her Ryan was coming with her but she didn't hear him. My husband didn't confirm that she had before getting distracted and losing sight of Ryan. It can happen to anyone but make it a point to be sure that the next person in the tag-team line of child responsibility KNOWS they have been tagged!

– Ryan was not wearing any type of Child Safety ID such as a temporary tattoo, wrist band, etc. He did not even have one of my business cards on him like he normally does! There are a million products on the market for this purpose but they only work if you use them! When Ryan was younger, we used a child safety backpack. He is 8 now so too old for that but believe me when I say I was tempted to try it anyway last week!

What did we do right?

– We had discussd with Ryan what to do if this ever happened. We had identified Cast Members for him so he knew what type of adult to look for. We had had the discussion repeatedly and calmly so that he, at least, did not panic. He knew to look for the nearest Cast Member.

– We also searched frantically for only a few seconds before going to the nearest Cast Member. Which turned out to be exactly where Ryan was headed. No sooner had I said, "I can't find my son!!" before I heard his voice behind me saying, "I'm right here!" Staying right near where we were separated, helped us to reunite more quickly.

The truth is that there are a million distractions at Walt Disney World and what happened to us, happens multiple times a day throughout Walt Disney World. Cast Members are specially trained to handle these situations. But extra caution is warranted especially during the busy holiday season. If nothing else, be sure to discuss the possibility of being separated with your family and have a plan. Hopefully you will never need it!