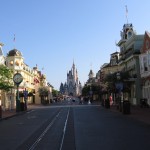 The news many folks have been waiting for has just been announced. The new Fantasyland expansion will have its Grand Opening on December 6, 2012! Under the Sea ~ Journey of the Little Mermaid, Be Our Guest Restaurant, Enchanted Tales with Belle, Ariel's Grotto, Gaston's Tavern, and Bonjour! Village Gifts will all be officially open that day. Previews for these attractions, restaurants, and shops begin on November 19, 2012.

Fairytale Hall will debut later in 2013 and the Seven Dwarves Mine Train is scheduled for 2014. Still no word on when exactly Be Our Guest will begin accepting advanced dining reservations for dinner. So far all we know is it will be later this month!