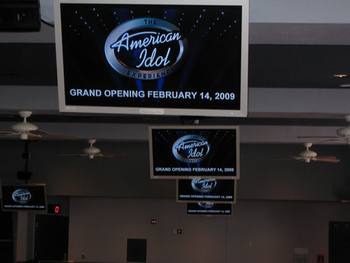 First I have to start with saying that I have never actually watched American Idol.   I don’t know why I have never watched maybe it has something do with that fact that I couldn’t sing to save my life.   Whatever the reason I wasn’t going to pass up the passholder preview of Disney’s newest attraction just because I never watched the show it is based on. You start off by entering waiting area.  While waiting in this area a cameraman and warm up guy (he was great by the way) will come out and get the crowd excited.    They also use this time to tape a few clips that they will playback during the show.  Once inside the theater you take a seat and the warm up guy comes out again and goes over what will go on, how to vote etc.   As I said I haven’t watched the show but I have to guess that the stage looks very similar to the one on the show.

Today’s show had 3 contestants that made it through the audition process.   Each of them chose a song and prepared for thier moment on stage during the day.  There are of course 3 judges that were similar to the judges on the show.   Since I don’t watch the show I guess I missed out on some of the jokes but thats OK by me they seemed a bit corny anyway.   The singers were each amazing and it was hard to choose a favorite.    Once they each sang thier song, got the judges 2 cents, there was a quick recap and we had 10 seconds to vote for our favorite using the keypad on the armrest of the seat.   The winner of the shows during the day will each go on to the finale show of the day and then the winner of that show gets a "fastpass" to use at a real American Idol auditon.  Even though I haven’t watched the real show I did enjoy this attraction.  The theater was packed so my guess is that there are plenty of fans just waiting to catch this new attraction.  Who knows I might even tune into the show on TV one of these days just to see if anyone from the Disney version actually makes it to TV.

This was the first time in 2009 that I have been in the parks (the month of Januray just flew by way too fast).   Anyway I wanted to share this photo of one of the new celebration banners.  Is it just me or is the color combination odd?