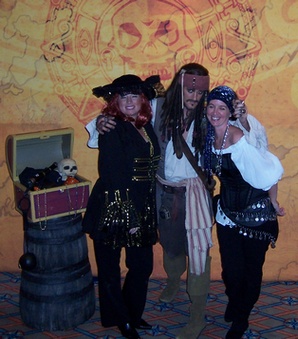 ARRHHHH!     It was pirate night and we had lots of guests come out to our pirate costume contest in Studio Sea.  Everyone looked great!

After dinner we headed up to deck 10 for the pirate deck party which were surrpised to find the firworks were still inlcuded!   After the party a few us grabbed lounge chairs to watch The Curse of the Black Pearl on the big screen!   Ok so I didnt make it through the whole thing but it was still fun.

Next was our day at sea.   I was able to join our lucky winners for Brunch in Palo.  After stuffing myself I pretty much relaxed the rest of the day.    Then it was time to get all drressed up for formal night.  Everyone looked fabulous in thier formal attire.   It’s not often that I get to get dressed up so I enjoyed formal night, of course getting to eat dessert twice helped too.    Annette and I dined with our table at Main Dining and then stopped by the Second dining as well.

Our next stop was suposed to be our second visit to Castaway Cay.   Captian Tom gave it his best effort but Hanna was just too close.  The waves were high and the winds were strong so the boat was rocking a bit overnight and early in the morning.   As we moved away from the storm the day got better and we all enjoyed another day at sea.  Today was filled with more surprises, mostly for Deb.   Since it was out last full day onboard we had a few events set up to wrap things up.   Steve gave a power point with a lot of the hidden Mickeys found during the cruise.    After that it would be time for our farewell party.  We were also making the farewell party a surprise birthday party for Deb.  In order to keep Deb from arriving at the party early Beci and Annette worked out a very special surprise and Deb was able to blow the ship’s horn prior to the party.   She was so excited she held the button long enough for the horn to blow twice.  She was then very surprised when we all sang Happy Birthday as she walked into the farewell party. The party was then topped off with a very special guest who just had to stop by and give Deb a birthday hug! Mickey stayed around for photos with everyone.   Then it was time to give out the prizes for our door decorating contest.   I have to say there were lots of amazing doors.    Many of the guests took the Hidden Mickey theme very seriously and even made thier door decorations into a Hidden Mickey hunt.

It was a magical cruise full of lots of surprises and new friends!  I can’t wait to do it again!    I won’t be joining the Deb and Steve Adventure by Disney in 2009 (which is already sold out) but I am looking forward to hearing what’s next!