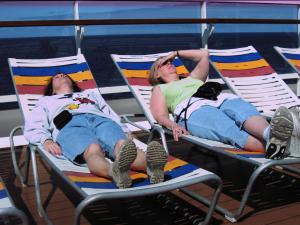 As you probably know, La Dolce Vita is Italian for "the sweet life".  I thought it an apropos title for several reasons.  First, the Magic was built in Italy.  That is something that the crew is proud about.  And in fact, deck 10 is a tribute to the ship builder, as you’ll see all the "Italian" touches.  Also, because I’m trying to lose weight, I rarely eat a sugary dessert at home.  I think I gave myself carte blanche on this cruise to eat dessert every day.  And lastly, I think a lot of people view vacation as a way to relax.  And I actually did that on this vacation.  It’s not my style and I couldn’t sit still for too long, but there were some good moments there, including a lovely massage at Vista Spa!

As you can tell, my friends did much better at the relaxing part than me.  Our first day out of Los Angeles was a bit chilly, but that didn’t stop Terry and Janet from getting some sun. Later in the week, I did spend a great hour or so on the deck watching ALL the Pixar shorts back to back on the big screen!  The waiter came around with a Itzakadoozie popsicle (you know the spiral ones that you spend like $4 for at Disney World) FREE!!  This was following my massage, and boy oh boy, it was a great day.  However, keep in mind that even though you shower after a massage, that massage oil stays on your body.  Let’s just say I got a little crispy.

Even though I ate a lot of desserts, I’d really prefer a meal to desserts.  And although the food on the ship was very good, don’t miss the opportunity to dine in port.  I like to ask the locals where to go.  My first stop in Cabo was at this little fast food place.  I got a HUGE, delicious meal….ah…YUM! Our second stop in Mazatlan was just as good and was recommended by our tour guide on the Hike to the Lighthouse  (more on that later).

I ate so much on this trip that I passed on the midnight dessert buffet.  However, I did enjoy looking at the sugar sculpture and thinking about the hours I spent watching those sugar sculpture competitions on the Food Network! And finally there was the place that was cozy when it was cold, made awesome soy hot chocolates with no whip cream and was home a rousing game of ’80s Trivial Pursuit between my friend Wayne and I…Cove Cafe.  The ladies who run this place never leave and are as nice as can be.  If you’re looking to socialize with the crew, this is the place to be.  But remember adults only! So that was the sweet part of my trip….the relaxing part.  But there were plenty of adventures, parties and fun that was had.  Arrrgggghh!