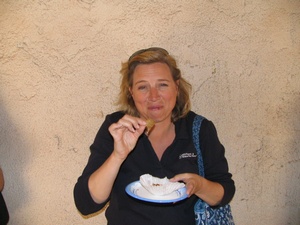 I left you hanging in the American Adventure.  Oh how I wish I could have had a funnel cake here… but 3/4 would have just been too much and I would have never been able to finish it before walking over to Japan.

In Japan I made a beeline back to the store.  After looking around the store and realizing I had no idea what I was looking at – and seeing the dried fish – I decide to ask for help.  The Cast Member in the sotre was GREAT!  I explained what I was doing and he tok me straight to the best chocolate of the day!  Three little pieces shaped like strawberries. AND the tasted like Nestle Strawberry Milk!  Perfect choice here!  The others are eating on gummies and pop rock cotten candy as we walking over to Morocco.

This has to be the hardest place to eat for me.  I follow Len’s example and get a baklava, but I go for the Chocolate and Cherries one.  BAD CHOICE.  It was really good, but about 5 pounds.  I actually ask the gal at the counter for the smallest piece she had!  Mike followed my example and we both struuggled to get this down.  At this point, Len is reminding us he has to leave and we are running out of time. France – just the thought of pastires normally gets me all excited – not today.  I would normally get an eclair or creme puff, but today I am thinking croissant – light, fluffy, NOT SWEET.  This was a great choice here and a good change from all the sweets I had eatten.  The downfall here – jello.  I still had to eat/drink the jello and the longer I kept it the more liquid it became.  The guys were not letting me off the hook.  Len had downed Peach Tea – so I had to drink the Watermelon jello. (Yep, didnt know I had a choice on this one – cause this is not the flavor I would have gone with) YUCK.

As we walk over the bridge to the UK, the smell of Fish and Chips greets us.  If this is a smell that helps you over the bridge in hopes of eating some, then this would be perfect.  For 5 people with full stomachs – not so appealing.  it was a really fast walk right past the stand to the Tea shop.  I was really hoping for a cup of tea, but instead was convinved by a Cast Member that the Flake would be the best choice.  It was a favorite of his and that it was light and airy.  NOT – it was light and flaky Chocolate.  It was not that it tasted bad, but it was the texture that got me.  It was flaky like bark.  So, once convinced to get this, I had to make sure others joined in.  So I was singing the praises of this candy – only to watch everyone elses faces as they took a bite. 🙂

Finally, the last country – Canada.  Two hours after the first meal, we are walking up to the Trading post.  Now, we all thinking something small.  hoping for a pack of two Maple cookies.  Well, think bulk here.  Everything seemed to come in dozens.  Well, there was no way any of us could eat 9 of any of these.  I kept searching and found the candy bars.  It was actually a very good candy bar – if I was wasnt full.  You can tell from the picture that Mike and I were just eating to be eating.  We dont look all that thrilled.  Only one of us was crazy enough to think liquids here.  yep, Maple Syrup!  Len could not eat anything else, so he opted for a small bottle of Maple Syrup!  Not sure how he kept it down.