Home Destinations Walt Disney World Eating around World Showcase – What was I thinking?!?! (Part One) 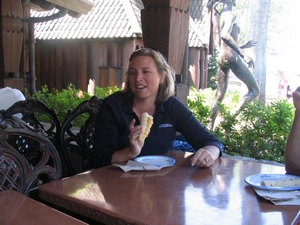 Eating around World Showcase – What was I thinking?!?! (Part One)

So have you ever thought about how great it would be to take in the cultures and cuisines of other countries… all in one day?  Desserts around the world? Drinks around the World?  I was having this great conversation with Mike Scopa about how great it would be to do a Progressive dinner of sorts around the World Showcase – so two meals lunch and dinner and a few snacks, all in one day – and that is where the WDWToday guys took over and decided it would make a great show! 🙂

So it was decided that we would try and see how well it would work out – in THREE HOURS!  One of the guys had an appointment so we had to adjust the day plan to three hours.  Could this really be done?

Well. I am here to tell you it can, but dont have plans for later in the day.  In fact you might not eat for a day or two after!

Here it goes.  11 am we are waiting at Catina de San Angel so we can get this dining experience started!  I order a Kids meal plate so that I can get some real food in before a few other stops, but not too much because we have just now discovered that this new plan has us eating every 15 – 20 minutes.  Kids plate was a great choice since it was a nachos and a taco.  All of us ordered the same thing except for Mike Newell who thought that the Nacho plate was a side order – NOT.  You really do get your monies worth on that plate.  So with that down we head to Norway to the Bakery.  I made the best slection here with the Cream Horn.  While the others went for smaller size, and not the best taste…. I went for light and fluffy and sweet!  This was a perfect selection and not too filling. Our next stop was China, but the Tea cart was not open yet.  After some discussion, we decided to head to Germany and then backtrack to China.  In Germany we all thought it was going to be pastry of some sort, but after looking at the portions – you get a lot of pastry for your money here – we decide to try Chocolates.  Anyone that knows me, knows that I was ready to tackle this.  I made a great choice of solid Milk Chocolate.  Some of the others went for small truffles – not always a good choice when the wrapper is in German and you are not sure what is on the inside!  We had lots of funn watching a few people eat at this stop.  Now back to the Tea Cart in China where we all ordered tea – cause with all this eatting you have to wash it down!

In Italy, it was back to the Chocolates for me.  It had been about an hour since we started this so all I wanted was candy – and a small piece at that!

Who would think that the American Adventure would be the hardest place to find food!   With rules of you have to eat 75% of what is on the plate, I was at a loss for what to get here.  While the others were drinking a Samual Adams – I was eating a Chicken Nugget kids meal.  Now, maybe they taste better when you are hungry, but when it has only been an hour and 10 minutes since you had the Kids meal in Mexico – not so good.  I force 3 of the 4 nuggets in along with carrots and then take the Jello along with me for later.  This turns out to be the dumbest move of the day since it is warm and jello melts.

If only this was the end of this adventure and a nap was the next stop…  Tomorrow I will take you around the second half of this journey.  What happens with the jello, what in the world did we eat in Morocco?  All this will be answered tomorrow… but feel free to try and guess or imagine what you would eat.