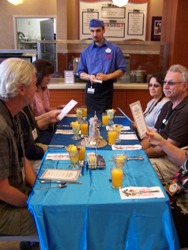 As on my last ABD trip they get you up and out fairly early. This morning we were told once again to meet at TWIST in the Renaissance at 7:50am in order to make it to our breakfast spot.  Ah, breakfast this morning is across the street at DisneyÃ¢â‚¬â„¢s Soda Fountain and Studio Store. An old fashioned ice cream parlor, located right next to the El Capitan Theatre and it has a studio store filled with fun studio merchandise. There are open this morning just for our group and set up full length tables instead of their normal smaller fountain tables.  We get a choice of eggs, oatmeal or a Mickey waffle. I opt to stick with the eggs and wait for the waffle until later in the week.  The fun surprise here is having our photo taken with Ariel who is set up in the back of the store. Other fun things going on for kids are coloring and mobile making at the counter… OK, I had to jump in and color some since the kids things seem so fun… After eating we head next door to the El Capitan Theatre and Ed is our Host here.  He tells us about the original history of the theatre built in 1926 by Charles Toberman and more on the history of this Hollywood era of big new movie houses like the Egyptian & GraumanÃ¢â‚¬â„¢s Chinese HollywoodÃ¢â‚¬â„¢s home to the first spoken drama this is an amazing house of long time movie premiers, stages shows, and now even rock concerts.  In 1989 the Walt Disney Co. undertook a two year renovation to take the theatre back to its original state of the 1920s.  The only real original pieces still housed here are cast iron light the lower level old Ã¢â‚¬Å“smoking room.  One cool fact we learned is that when a Disney movie premieres, even though this is a single screen theatre, the El Capitan makes more money than any other movie theatre in the US. This is truly an amazing piece of period architecture with a Spanish influence that is not to be missed if visiting Hollywood.

Again, we are surprised by their organist who comes out and plays a huge Wurlitzer organ.  He plays an array of percussion sounds along with sirens, bells, whistles, birds you name it.  He even surprises Brent one of the guests by singing Happy Birthday to him !  Ahhhh…. We get to walk up and Ã¢â‚¬Å“behind the scenesÃ¢â‚¬Â here meeting a Stage Manager and viewing their newly installed sound system.  Very Cool!  Heading from backstage to downstairs to a party room of sorts, that used to be the smoking room for guests who would come to this theatre. Next on our stop is again, right next door, the Jimmy Kimmel live show.  We meet up with Chris who tells us the history of the building where the shows is held.  ItÃ¢â‚¬â„¢s an old Masonic temple built in the 1920s and has been many different things over the year.  One notable Disney thing is it used to be a playhouse of sorts for post movie premieres shown at the El Capitan.  During Toy Story they broke the theatre up into several subgroups rooms each featuring a fun aspect from the movie.  This is the first of a few places where we were not allowed to have any cameras at all.  BUT we really got behind the scenes at the studio and walked through each production area with full access to sound, mixing, make-up and the cool Green Room.  The cool part here was while we were looking at the green room Uncle Frank and Guillermo (World Record holder for the most Underwear worn at one time) came in to say hi.  If you watch the show, they are regulars.  Uncle Frank is a colorful character with a colorful past.  He really is JimmyÃ¢â‚¬â„¢s Uncle too. During lunch the guides hold a lottery drawing for the 10 VIP tickets they have been given for some of us to be part of the audience at the Jimmy Kimmel show for tonight.  Guests playing are Eric Dane  from Grey’s Anatomy (McSteamy) and the band Vampire Weekend.  On our way out of the studio we stop by a permanent band venue in the backlot of the show house.