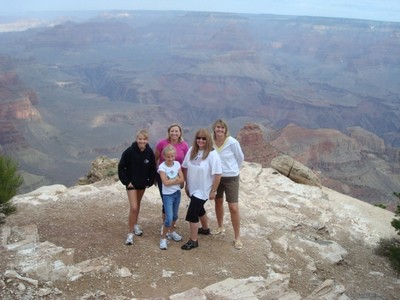 What a day itÃ¢â‚¬â„¢s been.  It started pretty early with a breakfast buffet at the hotel then boarding the bus for a more in depth look at the canyon.  We picked up a local expert who provided lots of interesting tid bits on the area and its residents..  both human and the animals who inhabit the area. While I have many, many pictures of the landscape, I have to say, none of them truly seem to capture the majesty of this place, but I have selected a few that you might enjoy.

At our first overlook stop, I learned something extremely valuable – Michelle is indeed a bit on the crazy side.  More on that later.

A few of us high tailed it off the bus and went to find a nice spot for a pic or two.  We had no idea that a memory would unfold.  One that will stick with me foreverÃ¢â‚¬Â¦Ã¢â‚¬Â¦ Michelle wasnÃ¢â‚¬â„¢t born with the Ã¢â‚¬Å“I could actually fallÃ¢â‚¬â„¢ gene.  Again, more on that later.

We did manage to get a shot of Michelle, Annette, her girls, and me on what seems like the edge of the earth as you make your way to the edge. So now that you see this picÃ¢â‚¬Â¦  consider for a moment there doesnÃ¢â‚¬â„¢t seem to be much beyond the point where we were standing. Well..  there was and it was the cause of several incidents of near heart failure by more then one parent and other observers as well.

But the lure of the Ã¢â‚¬Ëœperfect shotÃ¢â‚¬â„¢ was just to great and here are some examples –  Linda Mac, Deb, Ronia, Linda E and Wanda had to jump in the act.  Mike took the pic and there is George in the background taking a picture of someone else taking the picture, while I am Ã¢â‚¬Â¦yesÃ¢â‚¬Â¦ taking a picture.  There was a lot of that going on. The little people in the middle of the photo below are Tiffany and Michelle.  While this may not seem to death defying in itself, it will be much more apparent when you scroll to pic # 2 of the set Ã¢â‚¬â€œ itÃ¢â‚¬â„¢s a zoom out of the same location. My heart skips a beat thinking about thatÃ¢â‚¬Â¦

Those who know me can easily guess – I didnÃ¢â‚¬â„¢t get anywhere near that rock.  But Deb and I did brave a spot to perch somewhere just a few steps closer to the edge. So now that you have a vision of Michelle as the dare-devil Vacation PlannerÃ¢â‚¬Â¦ let me also tell you a quick tale of the moment a while later.  I was standing by the bus and saw three figures running from the brush near the edge of the canyon yammering something about being chased by a killer dear. Michelle, Annette and one of her girls were telling a tale of a jumping, snorting killer deer coming after them.  (okÃ¢â‚¬Â¦sure we believe youÃ¢â‚¬Â¦.)  When we asked for a picture to prove that a jumping, snorting killer deer was even a member of the animal kingdomÃ¢â‚¬Â¦ they failed to produce one.  So we can only assume it was more likely an angry squirrel or some other cuddly fluffy man-eating creature because we have the pic of them running and the reality of the location would seem to make that outcome much more logical.  Or maybe they all ate the bug in the candy from the other day? Who knows. We ended our afternoon after a visit to the famed watch tower featured in the background of the pic below of our truly awesome Adventure guides, Tiffany and Mike. The rest of the day was on our own to explore the area, relax at the hotel, or whatever we wanted to do with an option to return to the canyon later in the day for sunset.  We did go back but the weather was less then stellar, but we topped the night off with an on your own dinner where the now well bonded group of 38 decided to partake in the local pizza place.  Fun was had by all, especially those who spotted a very large elk who decided to use a grassy area across the street in a motel parking lot as a dinner buffet. To dark for a pic, but I could see him from my hotel window.  Quite a site!

Tomorrow Ã¢â‚¬â€œ we encounter the wonders on Monument valley!