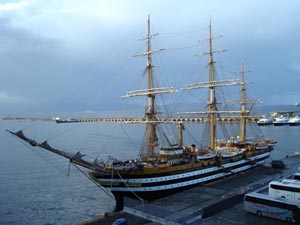 We awoke just in time to see Mount Vesuvius on the distance and a tall masted ship in port as we worked our way into the berth. It was a beautiful day around 72 degrees in the am with a few gray rain clouds off into the distance. Ok.. before I continue I need to be honest that the worse shore excursion part is actually from one perspective…mine.  And further I must preface this to include the fact that I am not really scared of many things, but heights is a phobia I will admit to.

So… to continue. When you first get the long awaited list of available shore excursions you make a date with your significant other and/or family to figure out what you are going to do when you cruise. Chris and I did just that and normally we both find something we both want to do together.  This time Naples offered us different options we both wanted to do conveniently packaged in one nifty 9.5 hour excursion.

Chris wanted to experience the Almalfi Coast and I wanted to wander the ruins of Pompeii so we opted for the Amalfi Coast Drive and Ruins of Pompeii tour.  Looking at the description it sounds like it will be a peaceful drive along the coast to view the unique architecture and natural wonders along the coastline.  In reality it was a very large bus winding its way over the mountains via a very tiny road that was lucky to have a straight area for more then half a football field or so at a time.

Deb & Linda joined us on this journey and we managed to add some new friends, Chuck and Tony as well.  Poor guys…  eerrr I mean lucky guys….  just happened to be in line with us as we got our bus assignments and we talked them into sitting with us too.

First of all, hats off to the driver who was able to maneuver that 50 passenger bus as if it was a 2 seater sports car even when the road narrowed to spots where only one car could pass.  (yes… when I said tiny road, i meant it).

We winded our way up the side of the mountain from the port to the top of the crossing where the Guide, Gino, announced that we were almost to the Almalfi Coast where we would see the most beautiful sites including sheer cliffs that range up to 4000 feet high.  as we went over the crest of the mountain,  sure enough, he wasn’t kidding.  My heart was beating so fast and  between the sheer height , the drop offs and the winding roads , I couldn’t help but think I was on a thrill ride instead of a transfer to see one of the most beautiful villages I have ever seen.  (If I could just open my eyes first!)

Instead of trying to interpret what I saw between my tightly clinched hands over my eyes, I will let Chris blog about the ride itself which I’m sure was breathtaking. (Further proven by listening to the gasps of people as we made our way up and down the mountains. While they warn you about possible motion sickness on this tour, I would also caution anyone who has a heights issue too. When we arrived at Amalfi, we had about 40 minutes of free time to wander the village and we decided to tour the Cathedral of the Amalfi which has some origins back to 596 AD and also is the resting place of head and other bones of St Andrew, Jesus’ first disciple. Wow…

We boarded the bus and drove another 20 minutes to a hotel where lunch was served.  Including wine of course.

After lunch we were on the way back towards Naples with a stop at Pompeii.  This was of great significance to me. I was a Mt St Helens survivor of sorts– while I wasn’t on the Mountain itself, I was camping on the south side of Mt Rainier just north of the volcano when St Helens blew and ended up walking in ash up to my hips and stuck in the icky goo for several days.  Thats another story in itself.. so I digress. To continue … I have been very intrigued by Pompeii and the fate of the people who perished in the tragedy back in 79 AD.  We toured the ruin and saw the streets complete with visible grooves in the stone from carts and chariots. Our guide Gino was a member of the archaeological team that helped unearth parts of the ruins back in the early 1970s so was full of information to share about the lives of the people who died here. As the rain started to fall on our out door tour, we moved a little faster through the site then I would have liked, but we did manage to see some of the original artwork and tiles that have been uncovered, along with a few of the bodys that were in the positions of their last moments and with expressions that provided an erie glimpse into what that horrific day was like. That was truly an experience of a lifetime.