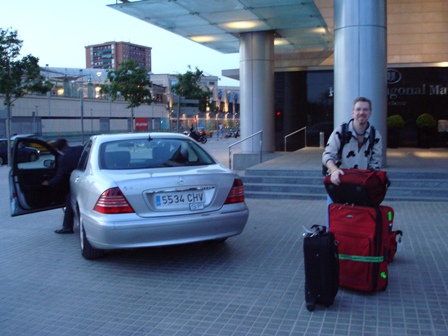 We land in London May 24th – 10 am London time. The steward provides the landing card we need to fill out and a very coveted fast pass ticket that allows us to skip the regular queue and breeze right through the passport control station. What took us over an hour in our previous trip to London was just about 10 minutes.  Our connection time here was a long one.  Almost 7 hours.  But there was a lot to keep us busy!

One thing I should mention is our arrival was met with a stairway not the auto gangway that goes right to the door. We descended the staircase and walked across the tarmac to the terminal where we were met with even more stairs. Something to be prepared for – check into arranging assistance ahead of time if needed.

We arrived in Terminal 1 and decided to check out the arrival lounge there before making our way to terminal 1 for our departure to Barcelona later that day. It seemed the air conditioning in the terminal was either not working or set for people who require 80 degree temps inside to survive.  It was extremely hot in the dining room at the lounge but it would be an hour or so before we made it to terminal one so we stopped for a quick breakfast.  They had fans set up in the room, but they weren’t doing much good, and since the terminal backed up onto a public street they had razor wire swirling outside the window. This just didn’t seem like the relaxing oasis I expected at the British flagship city, so we decided to move on to terminal one.  The razor wire wasn’t the only sign of security. The Brits take this very seriously and there are serious guards with serious guns at several locations thru the airport.

British Airlines provided a nice step by step guide to getting from terminal 4 to terminal one which involves a bus transfer. Against my better judgment Chris says we are heading for the trains and while that little voice was screaming “conform to the map!”  I knew we had 7 hours so what the heck…..  We by passed the signs for the buses and headed for the Paddington station train with the first stop being.. you guessed it… terminal 1, 2 and 3.   There is no charge for the terminal to terminal service and is highly recommended if you have the option from your arrival location.  With Comfy seats and plenty of room for luggage you don’t feel cramped in the least.

TIP:  if you are connecting through Heathrow, or any major airline really,  be sure your flight times offer some time over what they consider a “legal connection’ time which is usually the bare minimum the airlines are willing to gamble will make it in time for you to reach the connecting flight. The odds begin to tip if your departure flight is late, the airport is too busy to clear your flight to land so you circle a while, and/or doesn’t have a pocket (ie the Queens English for – gate) to allow the flight to pull up to. We had all three of these situations during this journey.

We arrive at terminal one and are a little lost. The ticketing area is right there but we have boarding passes, so we just need to find the arrival/departure lounge.  After a little searching and asking a nice gal at British bag drop, she points us to area “R” which is a hike to the other side of the terminal through several shops and counters unlike any airport I had seen before.  More like a shopping mall then airport. We follow the signs to the First/Business class check in area and are escorted to a special security line where people actually help you thru the check point.  I KNOW.. someone to help you?? I couldn’t believe it either!

The Lounge is located just beyond and here is the 2nd best part of my day…  they offered us a shower.  Basically they have private spacious rooms with a shower stall, sink, mirror and toilet. At the desk they will provide shampoo, conditioner, lotions, toothbrushes, razors and even shave gel.  It was nice to refresh after the flight.  But the best part was… they also have an onsite spa service with offers complimentary services. Chris and I both signed up for neck and back massages after the shower.

After our relaxation sessions, we had about 3 hours to spend in the lounge before the next connection to Barcelona. We found a quiet pocket near the service area so we could easily refill the cappuccinos and grab snacks. One thing that I found quite entertaining in the lounges are the conversations you over hear. Government contracts, 14 million dollar lawsuits and the pros and cons of i-pods vs the Zune. That last one was courtesy of one Kurt Russell (you know…… Captain Ron, Escape from LA, etc) and his traveling companion who sat approx 20 feet away. A few minutes later Goldie Hawn joined them and off they went to catch their flight.

And soon we were off to ours. We landed in Barcelona approx 7 pm and after collecting our bags we found a gentleman holding a sign with our name who whisked us to our unique Disney transfer – a Mercedes.  The driver had to have been practicing for the Indy 500 and would probably win. It was a fast yet strangely safe feeling race through and around the city to our hotel – Upon arrival, we checked in and were upgraded to a nice corner Jr suite for our two night stay.  Two separate rooms with a large bathroom and unique corner with large windows offering a nice view of the sea and city.

When we arrived we called to see if Deb and Linda  arrived safe (they are blogging at www.allearsnet.com )  and met them for a drink to celebrate the beginning of the journey!