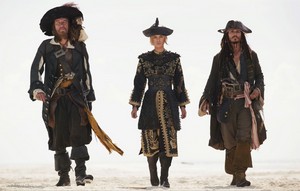 Depp’s in awe of ‘this god’ Richards :: Chicago Sun-Times

Friday, we’ll finally be able to see the final installment of Captain Jack Sparrow’s pirate adventures, or at least some people will be able to. Beci and I will be in Barcelona getting ready to board the Disney Magic the next day. We’re hoping to see the movie on board the ship.

”He was one of the people I admired for what he’s done and how he’s handled it,” the 43-year-old actor tells Rolling Stone magazine in its new issue, on newsstands today. ”Forty-whatever years of being this god. And he’s just cool.”

The Rolling Stones guitarist agreed to play Sparrow’s father, Captain Teague, in ”Pirates of the Caribbean: At World’s End,” the third installment of the franchise.

Depp’s in awe of ‘this god’ Richards :: CHICAGO SUN-TIMES :: People.