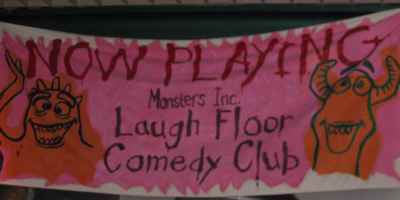 Today I braved the Spring Break crowds to check out the Passholder preview for Monsters Inc Laugh Floor.  The Magic Kingdom hadn’t reached the totally nuts crowd size that I am sure it will have later this week so it wasn’t too bad.  Since this was a Passholder preview there wasn’t a line at all.  After showing our passes we walked right into the first waiting room for this new attraction.  After a short wait inside we were then moved to the next wiating area in front of the theater doors.  In this room there are TVs telling you that you could text your own jokes in and they could become part of the show.  I don’t do the whole texting thing and don’t really have any good jokes that I could think of so that didn’t interest me.   Seems like I wasn’t alone on that becasue we only had one joke in the show that was supposedly texted in. After a few minutes the doors opened and we entered the theater.  Inside there are rows of blue benches to chose from.  I have to say I thought the benches were nice and large and spaced out so you didn’t feel crammed in there.  I later found out that there is a reason for all the space between them.  There are 2 big screens in the front and while you are waiting for everyone to be seated video of people in the audience appear with funny captions.  That was probably my favorite part of the show.  Next the monsters take over.  This is similar to Turtle Talk with Crush where the characters on the screen interact with the audience – the one differance is that if they are interacting with you, you also appear on the big screen.   It was sort of like a sporting event where the camera men out running around the theater so they can get the camera and mike on you – hence the need for all the space.

The whole point of the show is that Monsters Inc is now collecting laughs insted of screams so they need to generate "gigglewats" of power to fill up a canister.  Of course no matter how lame the jokes may be the canister does get filled by the end of the show.  It was a cute show and while I won’t be rushing back to do it again anytime soon I would say that it is worth a visit.  Each show will be a little differant so who knows you may end up seeing a much funnier version.

I couldn’t go over to the Magic Kingdom and not check out what is going on at the Contemporary.  All of the North end of the resort is gone!  No more wing bulidings on this side of the tower and no more tennis courts! I wish someone would tell us what they are planning to do next!  My guess is that some DVC properties on the monorail would go over really well.  Anyone else have any ideas?