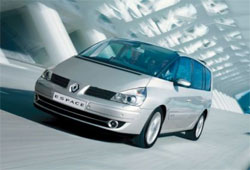 For everybody else, Day 8 was their travel day. To the airport, a long flight, and a welcome bed many miles and many hours to the west. For Beci and me, it was also a travel day, but we were met by a driver and his swank new Renault Espace mini-van. After battling his way out of the city, we hit the expressway and as it turns out, the Espace is plenty fast, and we made up for lost time at 150 kph (just over 90mph). And while that seems perhaps ridiculously fast for a mini-van, we were actually just keeping up with traffic, and the Renault was smooth as a whistle. Inside of an hour we were unloaded and checked into our Disneyland Paris hotel Ã¢â‚¬â€œ The Hotel New York. One note about the hotel: The bar was just off the lobby, and it smelled like a cigarette factory that had just burned down. France is just starting to regulate where people can and canÃ¢â‚¬â„¢t smoke, and so by the time you arrive, bans on smoking in public buildings (like restaurants and bars) may be in effect, but while we were there we avoided the bars because they smelled like the devil. Standard Disney plan, check in. Hit the parks. And Disneyland Paris has two. The Magic Kingdom, and the Disney Studios. We took our time walking over to the parks, checking out all the shops and restaurants in the Disney Village. Eventually we decided that we were hungry enough for an early lunch at AnnetteÃ¢â‚¬â„¢s Diner, home of such culinary greats as the Ã¢â‚¬Å“Rock & Roll BurgerÃ¢â‚¬Â, the Ã¢â‚¬Å“Green PieceÃ¢â‚¬Â vegi-burger, and the Ã¢â‚¬Å“Euro ChickÃ¢â‚¬Â chicken sandwich. The food was good, and the service was good in the French style (there, itÃ¢â‚¬â„¢s bad service to hurry anybody, you can sit at your table forever if you want, so you have to ask for the bill). After lunch we walked over to the Magic Kingdom. If youÃ¢â‚¬â„¢re a Disney fan (and since youÃ¢â‚¬â„¢re reading this blogÃ¢â‚¬Â¦) you want to see this park. It has a very familiar feeling to it, but itÃ¢â‚¬â„¢s always tinged with a slightly odd difference. Things are sort of where you expect them to be, but sort of not. And everything is just slightly different. For example, whenever they want to convey a feeling of Ã¢â‚¬Å“AmericanaÃ¢â‚¬Â they use the Wild West. So the haunted mansion (which is actually called Ã¢â‚¬Å“Phantom ManorÃ¢â‚¬Â) is designed to look like the Winchester Mystery house in San Jose, California. Inside the ride, when you get to the grave yard, you take a turn into a crypt and then descend into boot hill where spooks seem to be having a bit of a macabre party.

In case youÃ¢â‚¬â„¢re worried about language problems, donÃ¢â‚¬â„¢t. ItÃ¢â‚¬â„¢s really not a problem anywhere in France if youÃ¢â‚¬â„¢re willing to run into occasional minor language barriers, but Disney in particular is friendly to all of Europe, so many of the staff are even tri or quad-lingual. On my first trip to DLP several years ago the lady who sold me my ticket had happy little mini-conversations with everybody in line Ã¢â‚¬â€œ French, English, Italian, Spanish, and German. ThatÃ¢â‚¬â„¢s at least five languages from somebody selling tickets! You may need to be patient while the English speaking person is fetched on rare occasions, but as long as you remember that you are in a foreign country it wonÃ¢â‚¬â„¢t be a problem. After bombing around the park for a several hours we decided to try the most American meal we could find Ã¢â‚¬â€œ the steak house. It was quite good, and came with the standard fries or a baked potato, and American style vegetable medley. After dinner we shopped our way back out of the park and back to our hotel for a well earned rest.

Day 9 was our final action day. We planned to hit both parks, with the Studios first, and then whatever we had missed in the Magic Kingdom in the afternoon. Disney Studios in Paris is small (but with plenty of room to grow as it is backed by a small forest and some open farm land). The big attractions are Rock Ã¢â‚¬ËœnÃ¢â‚¬â„¢ Roller Coaster, MoteursÃ¢â‚¬Â¦ Action! Stunt show, the Armageddon SFX show, the Studio Tram Tour, and CyberSpace Mountain. Tower of Terror was well on itÃ¢â‚¬â„¢s way to completion when we were there, having reached itÃ¢â‚¬â„¢s full height, but still just a shell waiting for paint and landscaping, not to mention the ride machinery. You can do it in half a day easily, which is nice. Think of it as a non-crowded escape hatch with rides and food for when the Magic Kingdom gets over crowded.

Once we had covered the basics there, we moved on over to the Magic Kingdom again and in to one of those familiar but different rides Ã¢â‚¬â€œ Space Mountain. It looks kind of like the Space Mountain you know, but itÃ¢â‚¬â„¢s not. You start on the outside, and launch out of a Ã¢â‚¬Å“canonÃ¢â‚¬Â before you dive into the building where you scream your way thru twists and turns and yes, some loops also. Think Rock Ã¢â‚¬ËœnÃ¢â‚¬â„¢ Roller Coaster with a Jules Verne theme to it.
On Pirates of the Caribbean there is no western theme, but itÃ¢â‚¬â„¢s still different, right down to the pirate who swings across the bow of your boat during the pirate battle. That and the cries of Ã¢â‚¬Å“nous voulons la tÃƒÂªte rougeÃ¢â‚¬Â. So whatÃ¢â‚¬â„¢s missing from the park? Well obviously there is no Matterhorn. ThatÃ¢â‚¬â„¢s reserved for California. But there is also no Splash Mountain, as water rides and the cool and sometimes wet Paris weather doesnÃ¢â‚¬â„¢t encourage getting soaked for fun. Instead there is Indiana Jones and the Temple of Peril, which is a mine-ride coaster with a loop or two thrown in for fun.

Also significantly different is the Adventure Isle area. This is Tom SawyerÃ¢â‚¬â„¢s island done right. Easy access via bridges, with plenty of fun stuff to climb on with plenty of nice overlooks, makes this childrenÃ¢â‚¬â„¢s play area very functional and a hit with younger kids. ItÃ¢â‚¬â„¢s also close to the more extreme Indiana Jones coaster, so you can take the height challenged members of your party to Adventure Isle while the rest go for the coaster ride, then everybody can merge on Pirates of the Caribbean, or even dinner at the oddly named Blue Lagoon inside the PirateÃ¢â‚¬â„¢s attraction. In case youÃ¢â‚¬â„¢re wondering, Brook Shields was not to be found in the restaurant.

By closing time we had 9 days of walking on our feet, and I was ready for sleep, satisfied in the knowledge that we had covered London, Paris, and Disneyland Paris in style.

I canÃ¢â‚¬â„¢t wait to do another Adventure by Disney.