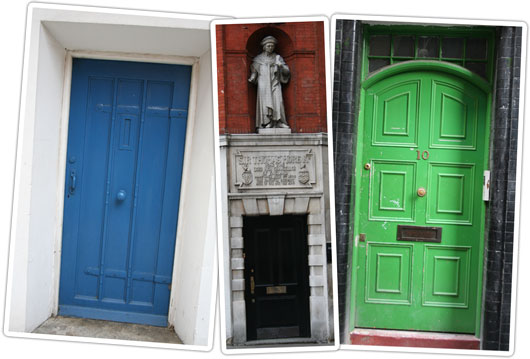 Sorry about the delay in posting, we were having too much fun at Disneyland Paris, but more about that in a few posts time. Now back to our regularly scheduled blogging. Paris, France. October 09, 2006. London is full of hidden gems, and this morning we set out on a walk to find some of them. Our home in London is just around the corner from LincolnÃ¢â‚¬â„¢s Inn Fields, one of the traditional homes of the London legal profession, and also known as the Ã¢â‚¬ËœMiddle TempleÃ¢â‚¬â„¢ because the space was formerly held by the Knights Templar. ItÃ¢â‚¬â„¢s full of little courtyards which all seem to be full of little surprises.

On the left is a law office. Traditional old buildings like this surround the squares. On the right is one of the Temple buildings which dates back to the time of Shakespeare. It was in fact used for the premiere of ShakespeareÃ¢â‚¬â„¢s play King Henry the VIII. Last on the list and in the center was quite a surprise for me, and one I recognized as soon as we walked into itÃ¢â‚¬â„¢s courtyard. The Temple Church. ItÃ¢â‚¬â„¢s actually two different construction projects, the original circular church which you may have seen in the Davinci Code, and the newer more traditional part which was added on later. The church was closed when we came past, but there were some workmen doing something and we were able to get a peek and this long exposure photo of the inside. Once we returned from our walk we all loaded into the coach again and drove off to a part of London known as Little Venice, because of all the canals crossing thru it. There we got to take part in another bit of hidden London, a canal boat ride to Camden Locks. In Little Venice we boarded a classic canal boat and cruised thru some of the lesser seen parts of London, past the London Zoo, and into Camden town.

At Camden we went back to using shanks mare and explored the Camden Market. Camden is an eclectic part of London with actual bargains on some really cool stuff in the market. From the Market, we got back on our coach, which had been magically transported to Camden, and rode off to the south bank of the Thames and Waterloo station. There we met our fourth (counting our feet). In France they call it the TGV. In the USA we know it as the Bullet Train. In the UK they simply call it the Chunnel Train to Paris. The train ride was quite comfortable and before you know it, youÃ¢â‚¬â„¢re rolling into a new country, a new city, and a new part of your adventure. Ah Paris, city of lights. This is where I post a picture of the Eifel Tower, or a lovely shot up the Champs-Ãƒâ€°lyees. Unfortunately it was seriously foggy on the evening of our arrival, so a picture of me in front of a Champs street sign is the best youÃ¢â‚¬â„¢re going to get. With a free night in front of us Beci and I decided to walk from our Hotel up the Champs toward the Arc dÃ¢â‚¬â„¢ Triumph. We ran into some of our travel mates at a bank machine (ATM good, cash exchange at the train station bad). We made it to the Disney Store, where we got some pictures of a few of the French plushies and their amazing hidden mickey chandelier and then headed back to the hotel. If you’ve never been to the Champs, it’s quite impressive. I suppose, even if you have been there it’s quite impressive. You see it in movies, or on final day of the Tour de France, but it seems to be one of those things that doesn’t translate well on film. It’s impressively wide, long, sweeping, and tree lined. Add to that the amazing buildings on each side, the specialty shops, the park-like setting of the lower third, and you have what the French like to call La plus belle avenue du monde. And they’re not far wrong. The most beautiful avenue in the world.

The middle of the day was sort of eaten up by the Chunnel transit, but that made for a nice bit of rest in the middle of the trip. Tomorrow weÃ¢â‚¬â„¢re on to the Louvre and a nice lunch in the Tulleries Gardens.