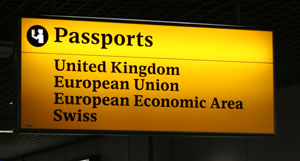 London, England. October 6, 2006. Our second try at our inaugural Adventures by Disney trip. Some of you may remember that our first trip was scheduled to begin on the August morning that the England police decided to arrest a bunch of terrorists and their plans for gel liquids.

That trip got postponed and thus our second attempt. Out the gate, and right into the immigration line. If youÃ¢â‚¬â„¢ve never been thru immigration, itÃ¢â‚¬â„¢s the place where every country in the world does their best to convince you that Ã¢â‚¬Å“coming here was a big mistake, mateÃ¢â‚¬Â. We, and the passengers from a few other early morning international arrivals, made the queue at about the same time. There are two lines. One for UK and EU passport holders. One for the rest of us. Forty minutes later we had moved the requisite 20 yards (as the crow flies) and answered those two vital questions, Ã¢â‚¬Å“Why are you here? When are you leaving?Ã¢â‚¬Â and moved on to baggage claim.

As chance would have it, our bags made it from the plane to baggage reclaim in almost exactly the same time we did, and were just rolling out of the magic baggage door when I got to the carrousel. We got our bags and moved out of the reclaim area and immediately spotted the Adventures by Disney sign waiting for us. Our greater pulled us out a side exit and lead us to our driver and his very nice Mercedes.

The trip from the airport to our hotel was about an hour, but the driver did a good job of narrating our trip and giving us some light info on what we were seeing. He took past a variety of sights and did a genuinely fine job of getting to very sleep deprived travelers to our hotel in fine style.

Ah, jet lag. Western USA to Europe is the worst jet lag in the world. Nothing could be worse than going 8 hours earlier. This means that in London, you are getting up just as you would be going to sleep at home. So if you donÃ¢â‚¬â„¢t work the graveyard shift youÃ¢â‚¬â„¢re going to have to adjust, and fast. I have two strategies: First, donÃ¢â‚¬â„¢t sleep on the way over, and donÃ¢â‚¬â„¢t sleep until night time when you get here. This is the Ã¢â‚¬Å“rip the band-aid offÃ¢â‚¬Â method.  The second is fly non-stop, and take a sleeping pill and force yourself to get 8 hours of sleep during the London night. Either way, expect to be slightly tired your first couple of days.

Once we got here we took a quick nap and then started to get ready for our first nightÃ¢â‚¬â„¢s welcome dinner.

Beci plugged in the voltage converter, plugged her anti-curling iron thingy (what do I know from womenÃ¢â‚¬â„¢s hair implements?) and almost immediately noted a burning electronics smell, and a lack of a power light. Disaster number one. WeÃ¢â‚¬â„¢re totally not sure what went wrong. We plugged in everything correctly, it just died, honest. So down to the concierge, who being a guy, had no idea where to get a hair iron thingy (my name for it). One of our Disney tour guides, Alexandra, came to the rescue and suggested the drug store (chemists) down the street. They not only had what Beci was looking for, they had the same brand in a Europe friendly model. Crisis averted (they always are). We got back to the hotel in time for the welcome dinner where we had a quick welcome talk by our guides Alexandra and Roni, and a bit of a meet and greet with our fellow travelers. We then went to a wonderful dinner where we had a bit of local cockney entertainment known as the Pearly King and Pearly Queen. Dinner was a gigantic sampler of classic English fare, including fish and chips, meat pies, bangerÃ¢â‚¬â„¢s and mash, etc. Served along side of it in a Disney first for me, was Pepsi. I have the photoÃ¢â‚¬â„¢s to prove it.

Tomorrow morning weÃ¢â‚¬â„¢re up early to get our breakfast here n the hotel, and then weÃ¢â‚¬â„¢ll head out for our first full day of touring.
More later.