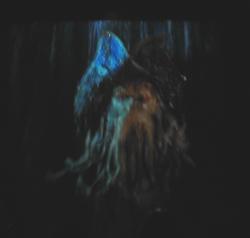 Pirates Have Invaded the Magic Kingdom!

Isn’t it sad that when anyone under the age of twenty hears the name "Davy Jones" that they’ll think of the Medusa-like man in "Pirates of the Caribbean: Dead Man’s Chest"?  Maybe it’s just sad for me.  Everytime anyone says "Davy Jones" to me, I can’t help but see my childhood crush on stage at the Epcot Flower and Garden Festival singing "cheer up sleepy Jean…"  beneath snake-like hair.   Okay, admittedly, I was more of a Mickey fan (that’s Dolenz, not the mouse!).  You just have to love a guy as whacky as that.

By now, you’re used to my digressions, but I will ask you to pardon them anyway.  The point of this blog is to show you that Pirates have indeed invaded the Magic Kingdom, Downtown Disney and Disney’s MGM Studios!  I have brought back photos from my recent trip to demonstrate just what I describe! Okay, it’s difficult to tell but this is a VERY cool Davy Jones effect.  It seems like you’re going right through a waterfall! Captain Jack does show up quite a few times! This was taken at the villain’s store on Sunset (going towards Tower of Terror) at Disney MGM Studios.  Cute aren’t they? This is in front of the World of Disney store at Downtown Disney!

And all of this for you to savor on that most fun of all days in September, Talk Like a Pirate Day!  No, really it is!  Click the link.  Ahoy, have a great day, gar!