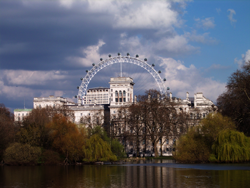 Last night I rushed to finish packing my bags. Normally I’m fairly
organized about packing. I make a list, I gather all my like items in
the order I want them to go into my bag, carefully pack them in, check
"socks" off my list and then move on to the next item. For some reason
last night was different. I had no list. No list for Walt’s sake! I was
flying blind. I wasn’t even positive about the number of days we would
be gone, but I was relaxed about the whole thing, because we would be
in London, and then Paris on one of the new Adventures by Disney tours.
I could buy whatever I forgot. It wouldn’t be a problem. Maybe I would
get to try some strange French tooth paste made from Sunflowers and a
lovely soft cheese. Maybe not.

Part way thru my
packing I noticed something disturbing on the TV. M.I.5 and Scotland
Yard had just arrested 21 terrorists who had been planning to blow up
some planes going from London to the US. Hurray for Scotland Yard, boo
for the terrorists. This did not bode well. Not so much for me, as I
operate under the general assumption that I am both the luckiest and
the most loved person in the universe, so I simply don’t have to worry
about this sort of thing, but Beci has yet to buy into either half of
my belief system, and people with bombs generally tend to bother her.

The
obvious solution to this situation is to simply not tell Beci that
there is any hint of a problem in London. I mean, that’s the logical
thing to do, right?

And my plan went well until
bed time when she decided that a bit of TV would help her drift off. My
suggestion that the Simpsons would be the perfect sleep draught was met
with bad news: "I think CNN would be better". And there, splashed all
over CNN were very smart looking bobbies mixed in with the more serious
anti-terror guys pouring over various buildings, tons of smashing
British accents, and the news that I had wisely hidden from Beci for
most of the night. So much for my twisted logic. I left everything to
the hands of fate and went to sleep at midnight, just 5 hours before we
needed to leave for the airport.

At 1:30 AM I woke up to the local side of a phone conversation:

"Did
you know that Heathrow is mostly shut down? …. Well it is. … Only
if you absolutely have to travel … CNN says they may completely halt
all air traffic … Thank you." I must have looked confused.

"That was Disney. I was just telling them about the arrests in London. They’re looking into it".

I
know exactly what you’re thinking. I thought the same thing. Just how
powerful is this wife of mine that she can get Disney to investigate
complex political events in other countries for her. My second thought
was how on earth did she get in touch with anybody at Disney at 1:30 AM!

It
turns out that the cool little Adventures By Disney ticket booklet that
they gave us had an emergency contact number in the back. Beci called,
and they answered. And they did start to investigate what was happening
in London. Several conversations and several different and very helpful
people later we were informed that the tour was at the very least going
to be compressed by one day and most likely canceled entirely as it
didn’t look like anybody would be able to get from the US to London.
They would know more in two hours Two hours was an hour too long for
us, as we would be well into the boarding process by the time they had
an answer for us.

"Not a problem", we were told. "Under the circumstances we will happily allow you to reschedule."

Mind you, this is early morning on our day of departure.

At
6:00, as promised, Disney called us back yet again to let us know that
the tour would continue, but with the first day trimmed back (not a
serious loss, as check-in and the welcome dinner are the only things
scheduled for the first day). But for us, and anybody else on the west
coast, it probably wouldn’t be possible to make the connections on the
east coast and get to London in anything short of two days, so we would
be rescheduling. They told us what they had available, we picked a
date, and that was it. They were outstanding. Disney is usually pretty
good at this sort of thing, but even compared to their best, this was
some remarkable customer service.

Now, to top it all off, we had
DVC reservations at the Hotel New York at Disneyland Paris for the two
days following our tour. Anybody with DVC knows that flexibility is not
part of their mantra. We needed to change our DVC booking just 9 days
before we were due to arrive. My expectations were low when I called in
and pressed ‘3’ about 17 times to get thru their automated menu system.

The
agent who answered calmly listened to my long and winding explanation
of why I needed to move my reservation. There was a moment of silence
on the other end as she likely weighed the odds that this was all a bad
joke being played on her by her supervisor. My low expectations dropped
even lower (DVC Reservations are the only place where I’m not the
luckiest and most well loved person in the world).

"May I have your member number and the name of the person you’ve been working with over at Adventures, please?"

And
then I was put on hold for about 10 minutes before she came back and
asked me for a number where she could call me back as this was taking
longer than she had expected. 30 minutes later she called me back,
thanked me for my patience, and said "You’re all set. We’ll send you a
new confirmation letter. Have fun in Paris".

What could have
been a total disaster, fixing different reservations with different
groups in the Disney travel empire, turned out to be one of the easiest
fixes you could imagine.

And then I got in my car and drove to work.

Beci and I will let you know how Adventures by Disney rolls in a few weeks.