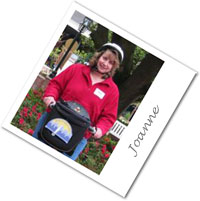 There comes a point in every Mouse Fan’s life when you think, Ã¢â‚¬Å“As much as I love experiencing the Magic of Disney theme parks, I want a little something more.  I want to be part of the Magic!Ã¢â‚¬Â  That is exactly what happens when you take one of many behind the scenes tours offered at Walt Disney World.

In the past year and a half, I’ve been filled with the giddy glee of getting the inside scoop.  Okay, admittedly, I’m a Disney junkie and watch every cable special on the theme parks.  I’ve also been fortunate enough to dance in a Disney parade and dine at the exclusive Club 33

Being a big kid at heart, the first tour I took combined two of my favorite things (cue Julie Andrews), Christmas and Disney…and even better…..Disney at Christmas time.  The Yuletide Fantasy tour demystifies the Disney decorating process for the holiday season.  The tour begins at Epcot.  Your guide shares different Christmas traditions and origins of decorations from various countries.  At Disney MGM Studios, you get a glimpse of the huge amount of work that goes into The Osbourne Family Spectacle of Lights.  Then bouncing back on the bus – and yes, I literally bounced – you head to Magic Kingdom.  They take you through the backstage area and then onstage to talk about the Ã¢â‚¬Å“big treeÃ¢â‚¬Â  and Main Street decorations.   A brief stop at the Grand Floridian had us craving something sweet — after we checked out the life sized gingerbread house!  The grand finale of this tour takes you to Holiday Services.  Imagine rows upon rows of ornaments and a workshop with cast members working like elves on lovely decorationsÃ¢â‚¬Â¦pretty cool!

About five months later, I was back at Walt Disney World and ready for another tour.  I had been eyeing the Segway ever since it made its first appearances in the parks.  I watched as they unveiled "it" for the first time on Good Morning America some years ago and thought it looked like a blast.  Well, this tour proved me right!  The Around the World on a Segway tour interested me because of the potential of two new experiences.  I was going to be able to try to ride one of those new fangled things and I was going to see World Showcase before it opened.  The tour begins inside a classroom where your two guides introduce you to the Segway with a DVD on how it works.  Then, you immediately get on one.  Don’t worry, no one finds their balance immediately.  When I stepped on mine, it felt like a scene from Urban Cowboy.  It bucked under me and a small jolt of panic went through my body.  Luckily, the cast members are right there to make sure you don’t fall.  It doesn’t take long to get the hang of it.  In no time, we were cruising around World Showcase.  The guides take you through a few tight spots so you have time to practice maneuvering it Ã¢â‚¬â€œ these things turn on a dime!  I enjoyed seeing all the service trucks hanging around the World Showcase as the cast members were getting ready for opening.  Before I knew it, the tour was over.  My only thought was, Ã¢â‚¬Å“Can I do it again???Ã¢â‚¬Â  I told you…I am a big kid!

This March, I took the Keys to the Kingdom tour.  I have been considering this tour for years but have been hesitant because I wondered if it would spoil the Magic.  The answer is a resounding NOPE!  The Magic isn’t spoiled like that science experiment you have in the back of your fridge!  This tour gave me even more respect for DisneyÃ¢â‚¬â„¢s the attention to detail.

You begin on Main Street in the learning about Walt Disney and his park.  Of course, that is oversimplifying it.  There’s so much detail in this tour; I couldn’t even begin to tell you!  You receive a headset that allows you to hear your guide without disturbing the other guests in park.  Our guide wore the costume that was originally designed for the guides at Disneyland.  We toured Jungle Cruise and Pirates of the Caribbean in our own boat with our guide pointing out some of the history and story behind the attraction (and of course, the hidden Mickeys!)    We headed backstage to see how the floats for the afternoon parade are stored, and then to the backside of Splash Mountain!  We left the backstage area just in time to see some performers step over the parade sight line.  The line in the sidewalk indicates where guests can no longer see them and when they can stop dancing.  It’s entertaining to watch them stop immediately as they step over it.    The break for lunch at the Columbia Harbour House made me an immediate fan of this overlooked, counter service, restaurant.  Order the tuna salad.  You won’t be sorry!

After lunch we headed onto Haunted Mansion and then….to the part of the tour everyone was waiting for…. the Utiladors!  I don’t want to give away anything, but I found the system of utility corridors pretty fascinating.  Ask your guide to let you hear the garbage get sucked through the system!  The tour ended and we headed back out into the Magic Kingdom a little more "in the know".

I’ve only scratched the surface of the many tours offered on property.  I plan on hitting them all one by one.  And of course, I’ll keep you updated!  These tours are a wonderful addition to your Walt Disney World vacation.  I, however, would especially recommend these tours for Disney veterans!  Please keep in mind that there are a few with minimum age requirements.

Don’t worry; it won’t change the Magic for you.  You’ll come out with a newfound respect for Walt Disney World.  You’ll feel immersed in Magic.  Isn’t that what your Disney vacation is all about?